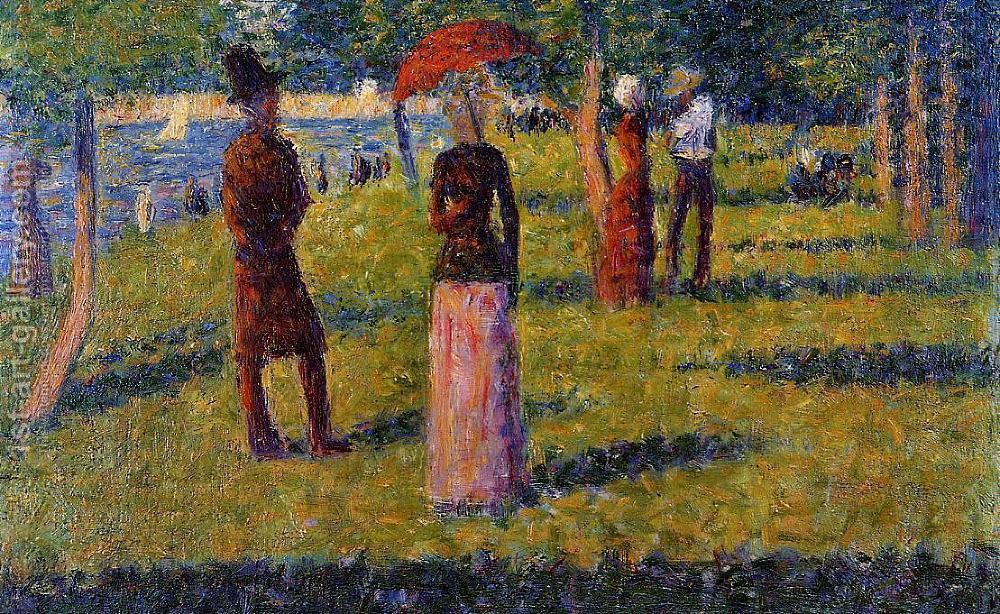 Post-Impressionism developed and was the painting trend for many artists between 1886 and 1905. The movement was a reaction against the Impressionists’ naturalistic depiction of light and color. It was, however, a predominantly French art movement.

Georges Seurat was born in December 1859 and died on 29 March, 1891. He is best known for devising two painting techniques often used by Post-Impressionists – chromoluminarism and pointillism.

Post-Impressionists used Impressionism ideas but rejected Impressionist limitations. For example, the Post-Impressionist painters continued using vivid colors, often thickly applied, but they emphasized geometric and distorted forms for expressive effect and used unnatural colors. In this article you will learn about George Seurat painter, how made his own style of painting and remain in the history of art.

What made Seurat one of the essential Post-Impressionist artists was his perceptions regarding light and the painting techniques to create new light and form concepts. Seurat was fascinated by various scientific ideas about color, form, and expression. He firmly believed that lines in specific directions, and colors associated with a particular warmth or coolness, could have expressive effects. He was enticed by the scientific research on color done by Isaac Newton.

Newton established the scientific color theory when he invented the color wheel in 1666. Seurat was intrigued by Newton’s ideas that colors are human perceptions of wavelengths of light and not absolute qualities. So he systematically categorized colors into three groups – Primary (red, blue, yellow), Secondary (mixes of primary colors), and Tertiary (combinations of primary and secondary colors).

Seurat started to use what has become known as the “color theory.” In principle, color theory is a collection of rules and guidelines that designers and artists use as a communication tool. According to the idea, color and a combination of colors convey messages to the viewers. For example, designers and artists use a color wheel principle to pick the best colors. Seurat used the color theory principles in some of his works to convey the theme of the work.

Seurat believed that contrasting or complementary colors could optically provide vivid tones that couldn’t be achieved by only mixing paint. So he developed a new painting technique that he called “chromoluminarism.” Chromoluminarism is better known as “divisionism” and “pointillism.” “Divisionism” refers to separating color into separate dots, and “pointillism” refers to the technique of applying tiny strokes of paint that Seurat used and was crucial to achieving the flickering effects of his surfaces.

These techniques inspired many other painters to use the same methods.

Seurat’s influence on other Post-Impressionist painters was, to a great extent, linked to his belief that a painter can create harmony and emotion in art by using color. According to Seurat, visual artists can use color the same way musicians use counterpoint and variation to create balance.

He also believed that painting could be expressed mathematically in terms of both color and form. According to him and artists with the same view, their mathematical expression resulted in independent and compelling “objective truth.”

Let’s now look at a few of Seurat’s paintings that earned him the status of one of the essential Post-Impressionist painters.

A Sunday Afternoon on the Island of La Grande Jatte

” A Sunday Afternoon on the Island of La Grande Jatte” was created from 1884 to 1886 and is Georges Seurat’s most famous work. It is an incredible example of the pointillist technique. The painting is on a large canvas and is a founding work of the Post-Impressionist movement.

The painting’s composition includes several Parisians at a park on the banks of the River Seine. This famous work is currently exhibited as part of the collection of the Art Institute of Chicago.

Art academics accepted that “The Circus” was Georges Seurat’s final Post-Impressionist work before his death in March 1891. Therefore, the subject of the painting – the circus – was very relevant. Moreover, the presence of circuses increased rapidly towards the end of the 1800s.

This artwork’s composition is one of the most critical aspects of the work. It is separated into two distinct portions. The front section is full of activity, while the back depicts the spectators. Both are given equal parts of the canvas.

Seurat also applied his theories on brush stroke and its relation to emotion in this painting. According to his chromoluminarism ideas, upward stokes equate to joy. The painting The Circus is full of upward strokes towards the front of the painting, where the action occurs.

” The Channel of Gravelines, Petit Fort Philippe” is a pointillist painting by Georges Seurat. It was painted in 1890, the year before his death. The painting depicts a harbor in the small French port of Gravelines.

It demonstrates the principles of the Post-Impressionist movement. He systematically applied dots in colors carefully chosen according to the laws of chromatic harmony. This resulted in excellent luminosity. In addition, Seurat also used shape and density to achieve his vision.

Although Georges Seurat had only ten productive years as an artist, he evolved as one of the essential Post-Impressionist artists. He will be long remembered as one of the artists utilizing the scientifically grounded color theory. He was also the “father” of the two painting techniques, divisionism, and pointillism.